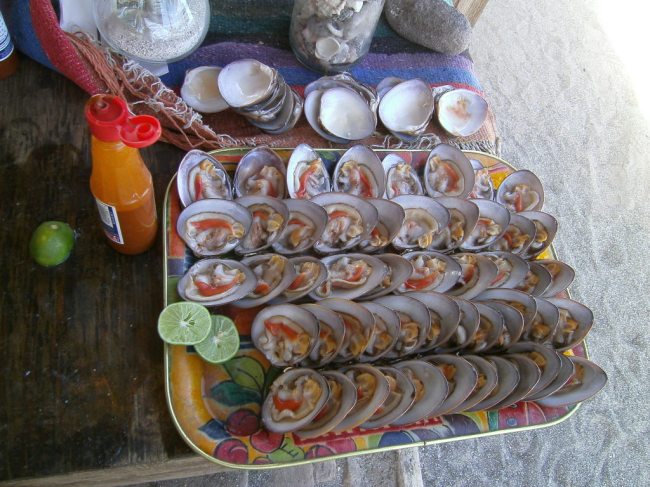 Yesterday Ron went clam digging.  This was clam digging with a style we were unfamiliar with, being from  the cool norwest.   He had an advisor.  Jorge. (That’s pronounced hor-hay gringo amigos).

I was going to sit this one out, resting after a wakeful night nursing my paddleboarding parts.  But I couldn’t help but go and investigate and Moxy and I needed to stretch our legs anyway.  We walked down the beach toward the big rock you’ve seen in a photo by now.  As I was coming down I could see someone walking out of the water with someone else attached to them.  Maybe they were lovers?  No, as it turns out a woman had gotten stung by a sting ray.  I guess it’s pretty painful, and Jorge called the paramedics with some concern that it might have been deep.   Everyone says you have to soak it in hot water and take something for pain, but usually there are no lasting effects.

Ron was out in this same shallow water, mask, snorkel , fins and a bag, handdigging clams in about neck deep water it looked like.  I swept aside my white cover up and sat on the cool part of the sand with my Stetson and white bandana (oops, sunburned).  Other gringos stopped by to inquire about his method.

Every few minutes we’d see his big bright white fins kicking madly, mostly above the blue-green lazy waves.  This was a particularly low tide, we’d been told, and a good time to do this.  He came out after an hour or so with half a dozen purplish white lacquered looking clams, about the size of my palm.  He held up his bag of booty.  I held up my bag of dog poo.  I went back to the house with Moxy, thinking he was done, but I should have known better, he was just figuring out what he was looking for and had improved his technique.   He came back with a doubled catch.  He had fun, but boy did he get sunburned.

We are going to go back down there today and they are going to make ceviche for us.  I am really excited to learn cause I love the stuff, and we will be using some of the yellow tail tuna Ron caught last week.  We need lots of recipes because they really lost their minds and couldn’t seem to stop catching fish.  Our freezer is FULL.  We’ve been giving it away; some to the guy that shared his telescope.  Some to Danielle, one of the guards (yes, they have lots of guards, day and night),  some to Julio, the concierge of the place, who has helped us with just about everything we could want to do, or people we needed to meet.  Of course a boatload to the boat guy and some to some unknown attractive women that walked by when they were unloading.  As is commonplace around here, we were to enjoy dining with one of them, a resturaunt owner of a ski resort in White fish and her fella when we ran into them at the winebar, a restauraunt/wine place down the street that advertises “group therapy” with pictures of various kinds of wines.

The food here, when we eat out, which is not nearly as much as most of the folks that are short-timers, is simple and tasty and comes in refreshingly NORMAL quantities.  Ron ordered a little chocolate pastry type desert the other day, and I had in my mind the oversized things they bring you back home, but it was actually quite a little dainty.  If it was me, it would have taken everything I had to share it!

We can get most of the vegetables and fruits we are used to, and then some that we aren’t used to getting regularly, like you can imagine, mangos, cactus.  Fresh fish is amazingly hard to come by.  There is a weekly sale of fish on Saturdays that lots of folks here que up to buy.   No shrimp.

I love the idea of eating fresh food that we caught or shot ourselves.  When I was a kid I was fascinated by the idea of surviving in a more primitive way, and when I was about nine, my dad introduced me to a guy, likely a native, who worked with leather and showed me how to make a pemmican bag.

We used to play at Indians and Mom provided us with homemade potato sack pemmican bags which we filled with dry oats and whatnot.  We built grass huts in the field and drank from the stream with quart jars.  The neighbor kids all got sick, but we were good Indians and were unaffected.  Summers, we would sleep under the stars or in a canvas army tent with it’s distinctive musty oily odor.  We would see how long we could sleep out and not go in the house and see what we could find to eat.  For some reason (probably REASON, actually),  the basement was fair game.   This meant we could get potatoes and bake them outside in foil.  SOOO good!  And Mom had a prodigious supply of canned goods put up which included quarts and quarts of beans with bacon, beets, applesauce, pear sauce, mint jelly, pickles, just a little dusty but lined up like glass soldiers with dulled gold flat helmets there in the dark.

I ended up later in life enjoying hunting duck and upland game and I think it all comes from the same intrigue of relating directly to what you eat.  I totally understand the friends that pale at the idea of shooting a beautiful green winged mallard, but really, do you know what they DO to those chickens we buy at the store?  How would YOU want to die?   I believe they are every bit as important as we are and am properly grateful in the rare event that we get one. We do enjoy properly prepared game. (as an aside,  I am so happy to see chickens in the backyards of our now grown kids house.  One near Mt Baker, Wa, the other, a regular neighborhood in Claremont California.  They don’t eat the chickens, whom they just love,in an affectionate sort of way rather than gustatory, but they do eat their offspring right away. ) The natives traditionally left tobacco to thank the great spirit (“we ALL have a Selee”, my dear Salish  friend told me) for game taken. The gratitude was important.  Even taking sage for spiritual and medicinal use required a tobacco gift and we would unroll cigarettes at the base of the sage and be thankful for the aromatic plants, which had to be a certain gender; female, I think.

I had an experience as a young adult when hiking up to one of our cleanest little lakes in Whatcom County (in fact it’s CALLED Fragrance Lake). It  was a watershed moment in all respects. .  I had hiked up the steep trail with coiling roots on rocks that had long lost the original nurse trees.  I hiked fast, for the exercise of it, then had a little swim, intimate with the lake, if you know what I mean, and was headed back.  First there was an owl, perched high, flightless, watching me. Then there was the greenest softest, most luxuriant moss covering a boulder by the trail.  The boulder was about waist high.  I couldn’t help but lay my flat palm on it to feel  it’s cool yielding spongey softness.  I stood awhile with my hand there, a gentle pressure between my warm palm and the cooler pleasantly moist blanket that covered the rock.  I would likely have gotten funny looks had anybody passed by but I was experiencing to my core the same thing you do when you stroke the furry back or head of a sedate and friendly big dog.  My relationship  to the moss had changed.  I got the sense of the moss, then the whole forest, being alive, more than alive in the sense I was accustomed to , but alive like a sentient being.   I am important.  You are important.  The bird is important.  The moss, equally so.    And of course, it follows, that the lowly clam, tunneling in the sand for all he’s worth with his one good foot, inches ahead of R’s seeking, digging hand, is important too.