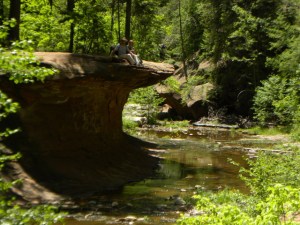 We spent three nights in a beautiful mostly empty campground by a spring.  Weather cooler, added a blanket,used their immaculate showers, did laundry, did a few short hikes in the beautiful red cliffs of Sedona, which was I was surprised to learn full of aura readers, taro readers, crystals and such.  Some kind of vortex.  Maybe that is why everyone there was rich.

Then on to flagstaff to visit with my youngest brother and his wife.  what a shift in temperatures!  we actually had snow!  Added the down comforter to our camper bed, and used the heater.   My brother took R and I on a six mile hike through a canyon, crossing and recrossing a shallow fern lined river guarded by monumental brick colored walls and pillars that increased in height as we went.  It was dizzying to look up.  I am afraid of heights.   R says I am afraid of depths, which actually makes a lot more sense, since the stomach rolling sensation is only present when gazing downward!

Toward the end of the trail there was a perfectly vertical ladder that enabled you to top a wall that was skirted on both sides by mountains of rock and what looked like the tarry gravel they pave roads with.  I don’t know that Moxy is afraid of heights but she had never climbed a ladder before.

I was going to just stay there and wait with her…she weighs 60 pounds and big dogs aren’t generally used to nor fond of being carried, but while we stood at the top deliberating, we looked down and she was already halfway up.   that was impressive, but the real difficulty, I knew ,  would be getting her back down.  I thought perhaps we could use our extra shirts to make some kind of sling.  It was too far to jump, even for my athletic standard poodle, who loves to leap.  R said he would carry her down.  I had serious qualms about that plan.  I was afraid the dog would as well, and shared my misgivings, but he seemed quite confident, and I had to remind myself, that he WAS after all, a strong capable firefighter who probably carried hysterical people Down really long bouncing ladders through thick smoke and crawling flames.  “Okay” I said.  I went down first and turned to look up and watch.  No trampoline or anything nearby.  He picked her up cradling her on her back like a big baby.  She stiffened.  He stepped to the top of the ladder and put one hand on the rail. My brother looking on.   ” you are going to go facing forward?”  I had to say with concern, but By the second step down Moxy had already made known her feelings about the whole operation by clutching with her strong front claws, the handle of the ladder.  Ron was completely unable to get her to yield and if Brother J hadn’t been so handy, they would still be there wrestling about technique!

funny thing was, at the bottom when R set her safely Down, she jumped up and down and wagged her tail gleefully in front of him as though they had just conspired to perform the best circus trick ever and carried it off to perfection!

My brother and husband and I talked about old bands, who had seemed to pass their peak, and how almost embarrassing it was in some cases to watch them fail to hit the high notes, and continue to sing the songs that sold so well before, when they should have moved on from rock to blues or something.

J announced he was going to see Paul McCartney in August.  R said he paid nine dollars at the door to see the beettles in Seattle when he was in high school, and though they had good seats,  it was impossible to hear what with the girls screaming, as you have probably seen on old tv clips.

We talked about the highs and the lows of our family life, the really good trips (geographical and otherwise), our siblings, our parents, old friends, renewed friendships and friends who checked out early.  The joys and miseries of being a honest to god bohemian raised among hippies in a pretty straight family in the sixties and seventies.  I remember bell bottoms.  J remembers surprisingly early attempts at smoking.  Queen, Pink Floyd, big brothers grass in the attic.  Happy face wallpaper in the bathroom, sock it to me bedspreads.  J got facebooked a real relic,  wallpaper recently uncovered by old friends that live in our childhood home.  What IS it about wallpaper that can take you right there just like a fragrance can?

Family highs and lows.  Joys of a really loving happy childhood, along with the craters left by mysteries of the heart, and addictions in all of it’s clutching clawing facets, loves, losses, bliss and infirmity.

It is all of a piece, just like this mysterious moving landscape,  red fingers of stone beseeching the heavens,  unlooked for craters inexplicably on a desert ranch, when the very idea of something from outer space touching us was unheard of.  It’s all of a piece, and though I cannot say I wouldn’t change a thing, my brothers, my sister, my family, I have been glad to walk with you.