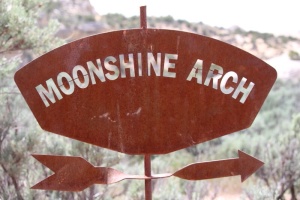 Moonshine Arch was visible from the highway when we finally learned where the unmarked and hidden dirt road to it was at. It was noted in a local brochure along with some other tempting hikes and geological and historical marvels near Vernal, but when I googled it, one of the first remarks I saw was “thanks so much for the directions, we NEVER would have found it…”
We had driven that highway a few times now, but this time WE had the Secret Squirrel directions. And How silly, you could actually see it from the highway, and cool cavelike formations just above it in the brick and buff sandstone!

We Parked the truck at the iron sign and arrow because it looked to be a ten or fifteen minute walk, and Moxy and I needed the leg stretch. Seemed overkill to bring our usual water, snacks, bug juice for such a short jaunt.
We followed a straight dirt road. There was a right over a hump that the ATV’rs used and it looked like the closest way to the two arches, now only minutes away. R wants to take the more formal looking right that was up another block. I amicably agreed, enjoying the morning, and we both got laughs from Moxy’s bunny hunt. I eventually lost count of how many fat cottontails and big eared jackrabbits saunter hopped across the road right in front of us as Moxy panted with her nose down, blindly zigzagging through the dense sage desert. 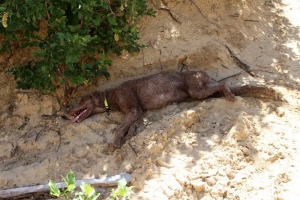 So we take the second right which seems to end in a wall and a small wash. We think the arches are just to the right of us now, but Moxy is flopped in the shade with her tongue lolling in the dirt so I stay with her while R walks up a nice round house sized boulder to look. I find miniatures of the rounded stacked circular boulders in the dry creek bed.
R comes back shrugging his shoulders and looking puzzled. I walk back with the dog to the first right turn and R goes cross the smooth whale backed boulders and we meet. Absolutely nothing. We have been chasing a rainbow. We have been duped!  Wee have been drugged!  Someone moved thirty foot high arches!  Alternately, we are in a Twilight Zone movie.
We discover another sign that indicates we have not walked far enough. We agree to have lunch in the camper, prepare for more of a hike and have another go.
As we retreat from the mysterious void R looks back and notices a rock formation which in the morning light COULD be construed by the uninitiated as two beautiful arches!  Hell it was almost like McDonalds, those Golden Arches!

Happily, our wandering was rewarded in the end. After a mile or so, under gathering clouds and distant rumbles we enjoyed looking into and out of the REAL Moonshine Arches. 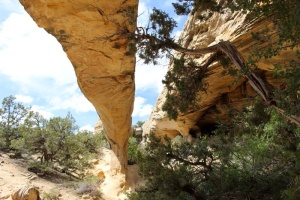