The gravity of our situation this May was merely the challenge of unexpectedly cold weather moving south to north. The unwanted periodic confinement has been discomfiting but reading about the astronauts prepping for Mars gave me a new appreciation of extreme adventure travel.

For instance: Bathing. These guys did not bathe for weeks, really. You could actually drown in your own shower if water started going up your nose, and droplets DID tend to gravitate back to the body. Dead skin cells floated around instead of settling to the floor. Chafing drawers was an issue as was B.O.
We, on the other hand, simply have to close the toilet lid, draw the shower curtain, soap up and turn on the propane for a nice though extremely tight (impossible to turn around or bend over)warm shower. Don’t forget to put away the toilet paper!

And personal space: they had none, really. They were screened for easygoing personalities as opposed to the early moonflight Astronauts, hard edged cowboy types with the right stuff who likely compromised less but were fearless.
R is made a little more of the right stuff, I suppose I am more the negotiater proven out perhaps by living in a consensus based community for seven years. R walks into fire and he isn’t afraid of electricity, (retired firefighter and electrician) but putting up with peoples shit is not his forte.

Speaking of shit.. Did you know they had to use adhesive baggies and after doing the deed massage something into it to make it decompose? One astronaut felt perfectly comfortable asking someone else to do his mixing if he was too busy.
And that females were considered a problem because they couldn’t use a condom catheter to urinate?

Suffice it to say when we are in a campground with a pit toilet, we are more than happy to use it. No concern about bits floating around, in any case. They actually had whodunit conversations about ownership of such flotsam recorded on the Apollo 10 Mission Transcript. They were orbiting the moon, notes author Mary Roach (Packing for Mars), “200,000 plus miles from the nearest bathroom.”

CERNAN:…You know once you get out of lunar orbit, you can do a lot of things. You can power down…and what’s happening is-
STAFFORD: Oh-who did it?
YOUNG: Who did what.
CERNAN: What?
STAFFORD: Who did it? (Laughter)
CERNAN: Where did that come from?
STAFFORD: Give me a napkin quick. There’s a turd floating through the air.
YOUNG: I didn’t do it. It ain’t one of mine.
CERNAN: I don’t think it’s one of mine.
STAFFORD: Mine was a little more sticky than that. Throw that away.
YOUNG: God almighty.

The boredom of confinement. I am known to be quite fidgety. Used to be called active, now it is certifiable and medicatable!
I am unused to and find it very uncomfortable to sit for long periods ( like more than twenty minutes! ), and that is even if I have a project such as painting or writing. I have never had a sit down job.
The Japanese astronauts had a test. Make 1000 origami birds. The ones whose origami technique fell off as the pile of birds grew were not considered good candidates. In my heart of hearts I believe I would have defected into creating a whole wierd zoo by number twenty. R, on the other hand would increase in precision and his 1000th origami crane would be the most perfectly creased bird ever made.
So we we do our space walks each time the weather even LOOKs like it will break, we play scrabble with much attention to the scoring, and in desperation I even started playing cribbage. We cook. 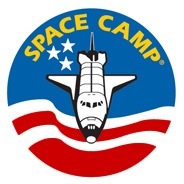 Remember space food sticks and carnation instant breakfast? all experimental nutrition for astronauts. They hated it. Some of their food was created by a veterinarian who had little concern for the human palate. But food was tricky. Crumbs float and could go up the nose, as could blobs of liquid or gelatin.
The astronauts were in such strange environs they really craved food that was familiar. Too bad for them.
We on the other hand, rejoice in the new oven, not used much before this because it was simply too hot. Now we talk about baking shepherds pie, toasting almonds, making cornbread. A hot meal becomes a way to pass some time as well as warm our nine by thirteen quarters.
The three of us sit at the microfiber dinette with the kidney shaped grey table, Moxy, the microfiber dog, now with a longer winter coat, in the middle, politely keeping her chin off the table. We look out through the fogged up windows to the Towering, snow clad Grand Tetons as the cold rain tumbles down and see, well…a big old chocolate Mousse, I mean chocolate colored Moose. Right close for a photo!
And then, just a bit later we look out to see a Marmot sitting on his haunches on the picnic table peering into the window, sniffing R.s curry chicken and maybe listening to the Irish music.
It can be a bit claustrophobic, and I do take my coffee outside first thing rain or shine, but cozy does have its moments. I can do this. It’s not rocket science. 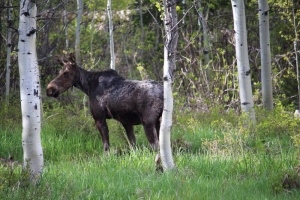