Kalaloch. Clallam County, Washington Coast.
Clallam, the Strong People. There was a contest many many years ago among the Coastal Peoples to see which tribe could raise the biggest beam for their lodge. Many Tribes attempted to hoist a massive ancient Cedar in unison, using teams of their strongest men. The tribe that won, were quite clever; rolling the log into the water and wading in deep enabling them to shoulder the giant tree together to the Lodge. Thereafter they were called The Strong People.

We used to camp here on the Washington Coast when I was very young. The weather was never like this – really balmy, warm. If it wasn’t raining and cold, there was fog heavy enough that it would chill us and even seep through the green canvas tent where we huddled in sleeping bags playing board games.
We loved the wide open ocean, the miles of sand for building castles, sculpting spectacular shipwrecks (including body parts), assisted by our father, to our delight, and likely the consternation of passers by, now that I think of doing it today. 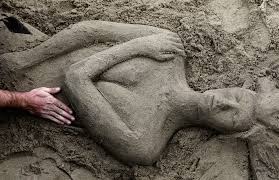 I don’t remember all of the amazingly contorted and sometimes grotesque cedars that permeate the campground R and I stayed at this time. Very wild. Stunted trees with massive goitered trunks and roots. Branches hanging low and bending in crazy rounded patterns that made them hard to differentiate from roots. Ferns growing way up in the tree – the kind of ferns we only see on the ground at home.
Really spooky in the October twilight. 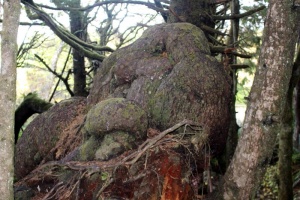 R and I search for the massive beached log we straddled like an elephant ten years ago on a road trip we took before we were married. There are miles and piles of driftwood, but we didn’t see OUR log. Must have set sail to warmer climes as well.

We are invited for drinks and appetizers by our neighbors at Pacific Beach campground. They are in a very small RV, and like our way of avoiding the limitations of the Huge RV’s as we have tried to do. They want to quiz Ron about our cargo trailer. Really interesting couple. Worked with Outward Bound for their entire careers, spending ten years in Africa, and also living in China. Raised children in places so remote, they were offered five cows for their blond haired little daughter by a headdressed chieftain. Great storytellers. Sailed to Loreto,where we are headed.

Every year the conversation starts, they say, about whether or not they are good for another season of sailing. he is a purist, she remarks, indicating he does not run the engine except in dire need. He tells her he will do another season if he can still climb the mast. She says “up you go” and belays from below. He makes it and shouts from the top, noticing all the bird droppings, “I wish I had a bucket!” She, not wearing her hearing aide, says ” WHAT?” “A BUCKET!” Shouts he, and pantomimes the circular top of a bucket. “YOU WANT TO GO AROUND THE MAST?” She guesses out loud. “NO!” he raises the decibals till the neighbors in the harbor could likely hear! “A BUCKET!” She gasps, mortified, and calls out “don’t you DARE talk to Me like that!”

They laugh hard with us as they reminisce. They do still sail, and they are old enough to be OUR parents! never would have guessed. Brits that ended up living on Whidbey Island. They could have lived anywhere in the world. Strong People, I’d say.