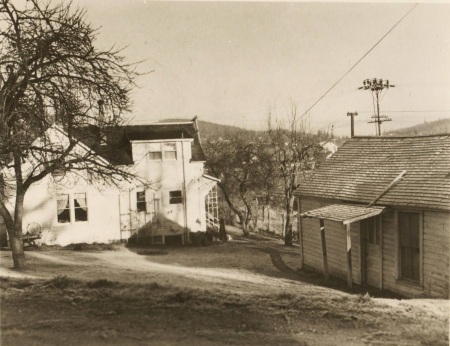 Prompt:  write a first chapter.   (really?)
There were two things. The Outside and The Inside.
Outside, I held a potato sized gelatin cluster of frog eggs dripping swampwater through my ten year old fingers. I looked into the periods and commas contained within and aimed to nurture them and watch and see what life would come and how soon.
Outside, I peeled the stiff green skin from the tassled rushes and marveled at the thin and perfect cylinder of foam within. Such a man-made effect, it might as well have been a pipecleaner.
“Go outside!” My mother had implored. My brothers and I made rafts of inner tubes and castoff splintery plywood, and beanpoled around the red bark bushes, examining newts and frogs and pollywogs. Waterskippers skated around us, dimpling the skin of still water and powder blue helicopter dragonflies floated at eye level, gazing into our eyes.
When the swamp was high we could play in a grey wooden boat in the deep section on the far side of the old Interurban railroad bed. That raised bed could take us a few blocks Northwest towards a brick school on school days, but more importantly it went forever South to more: OUTSIDE. To the morrell and licorice fern woods, to my best friends’ house on bare feet or by pony.  As I grew older the trail grew longer taking my mount and I to muddy Chuckanut Bay where there was once a hitching post and a store that sold ice cream and beer. We started with ice cream and when our horses were taller, moved to beer. Later yet, to Clayton Bay, a half day ride one way to bareback swims and gargoyle eroded protrusions that formed a natural corral.

But when we were in grade school it was good enough to immerse ourselves in our swamp when it was warm. The water was weak coffee against our skin. There was mud between our bare toes, and green slime left over in our swimming suits, but it was a healthy swamp that smelled swampy in a good way. Like earth and water and grasses, not like rotten vegetables.
The big white domestic duck would mingle with the hens; wild and tame. He hissed at us and wagged his tail and threatened us with the mere ugliness of his scarlet new -scab face. He swaggered after the hens and my tow headed little brother asked “whats that little worm on his butt?”   “Uh, I think that ‘s his penis, say I.”
We had books Inside; The Life Cycle Library. Four volumes in a maroon and grey cardboard holder, but the education we recieved Outside was superior.
“Twitterpated..”. The only word my father used that had any connotation of sex education. To me, it still means a constant nocturnal chirping through my open upstairs window, and double decker frogs. The Life Cycle Library did not have wonderful words like twitterpated.
The Outside was where my bony pinto pony stood in the fall or winter or spring mud, waiting for me to come with oats and molasses and open fresh bales of dry cedar chips.  Such a fragrance!  Horsebreath and cedar!  I would lay down in them, next to the disused chicken coop and never mind the amber incense coating when I stood up again.
Outside was where we met our friends in cherry tree crossings, in a dirt lot we called playland, and in secret boy forts mysteriously called “BUPS.”
We met in the puppy shed, with its warm baby body fragrance mixed with golden straw.
we met at the underground forts, at a teepee, at a wigwam, at a stick built fort in back with a door and window. Best meet up place? Barn roof. Quorum fulfilled? Kick the plank board down. We can jump off but nobody else can get up!
We met our friends or we were our own friends or we engaged with anything alive or dead we found outside. Frog eggs. Maple seed spinners. Sweet dandelion chains that show by the glow on your chin: “who loves butter?”

And then, there was the inside, which was always about the outside. I don’t mean indoors, I mean inside myself.
I wrote a little autobiography at ten: “my life and welcome to it” it said on the brown little cover. I wrote about the outside, mainly, in my fat little pencil letters, I wrote chapters on the lined paper about my animal friends and what we did.
the boney poney, the black and white goat, who knew how to come in the house, go straight to the bread drawer and open the tupperware with her teeth and lips. She was my brother’s pet. The sociable little pink pig, the beautiful dimwittted Samoyeds, the black barking Dachsund, the chatty athletics of the Siamese cats. The sun merely rising and setting seemed worth recording in that little chapbook.

With my eyes and skin I absorbed the Outside and it leaked into my Inside but couldn’t settle there and wanted out again. I don’t think I ever shared that little book, and when I rediscovered it years later, I was glad I hadn’t. It was a silly secret I couldn’t tell. It followed me around for awhile, a memory to keep, but eventually was left behind somewhere, in some shoebox with photos and dog show ribbons and hand made pemican bags of burlap.
Outside still pools up Inside; all blue and gold.
I steady my hand to let the word pictures trickle out my pen while they are still moist and bright.

2 thoughts on “OUTSIDE INSIDE OUT”