writing prompt: 1.  a song that brings back a memory  2.a journey 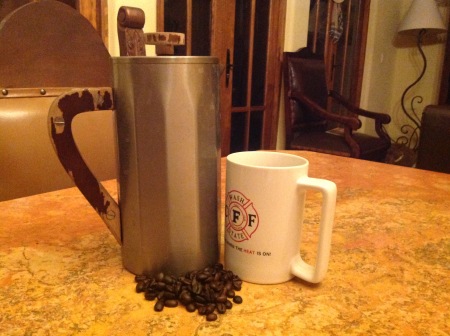 I’m feelin’ kind of lonesome, haven’t slept a wink. I walk the floor and watch the door and in between I drink….black coffee
I remember the smell of his neck, a fragrance as wonderful to wake up to as my morning tonic, my steaming black coffee. I would lay my cheek against his chest and just inhale.
I used to laugh when people described their coffee preference as if it were a lover: “black and bitter, like my women,” or “black and strong or sweet,” or whatever. I loved him even more than coffee, which, if you knew me, well, its ALOT, but as a mother once told her daughter in some long forgotten movie, “if you want monogamy dear, marry a swan.” His infidelity after three years, was a deal breaker and I sang black coffee with a raw heart. I understood on a whole new level every sad song That ever came out of a radio.
I sat in my weekday room looking at green floral wallpaper and played my avocado green upright, (you remember harvest gold and avocado green appliances? My heirloom tiger oak piano was updated by my mothers’ 1970’s sensibilities) . I ignored the several broken and mute black keys and rough and yellowed ivories.
For a time I would only rouse myself to collect the boys from daycare and try to be a proper mother. It was a cold winter with unusual amounts of snow, and winds so high and cold it wasn’t safe for the kids to bare their ruddy cheeks.
The pipes froze. The boys warmed coins and made tiny ice fishing holes on the inside of the frozen windows.
I had been renting from the church next door. I had gotten religion in Junior high and quickly prosteletized all my friends, most of my family and any stranger who would listen to my passion for apolpogetics.

I learned some things when the church guys came to thaw the pipes. My Peace sign, which was my Christmas decoration made with canned snow and sprayed on the front window was not entirely popular. I was so naive. I thought every mother wanted peace. Isn’t that a biblical saying? Or Hallmark card at the very least? Peace on earth, goodwill to men, right? And speaking of Hallmark cards, do you have any idea how hard it is to find a card with a face on it who isn’t white? Or a bandaid that isnt the color of caucasion skin? Anyway.
They were also unhappy that I was keeping company with this fellow. I had embarrassed somebody, evidently.
I had tried, I really had, to get reintegrated with my church. I went to the young adults sunday school and tried not to choke when the teacher, a guy my own age, indicated that a womans purpose was for procreation. My hand shot up as I looked left and right to find not a single expression of sympatico dismay. “But, but, havent we already DONE that pretty much?” I asked, astounded.
The final straw was the dancing boycott on the junior high halloween party. They wanted to simply have a little square dancing. They had always had the big barn party, with apple dunking, hay mazes and the like. Apparently nobody took issue with the pagan holiday, But evidently the deacons ( my burgeoning feminism now noticed the total abscence of deaconESSES), were afraid “somebody might get the wrong idea.”
Right or wrong, I had an idea. I had a good idea I did not belong here.
EVERYBODY dances! Don’t they know that? In the whole wide world, every culture dances and sings! And my friday night ecstatic dancing ritual brought me so much bliss it bouyed my heart through every rotten single Mom saturday. It brought a sunday to my weekday room, as Ella put it.

We’d traveled our first summer together with big Jim to Florida, driving straight through from Washington. I got to drive through Texas at onehundred miles an hour. Not because I usully drive so fast, but what do you do with hundreds of miles of straight, hot and empty? We saw the sillouhetted oil wells bobbing their thirsty necks up and down. Fields of them. We stopped to wipe huge grasshoppers and monster beetles from the lights and windshields when we stopped for fluids in and fluids out. Our AC was a small styrofoam icebox filled with melting ice and towels to drape over our sweating necks.
My boys had hair so nappy his family was not so sure they werent blood kin. Mama served us grits and hushpuppies, fried eggs and sausage with Parthinea and the rest. I was invited to play Whist after dinner. We went out to a club. I experienced for the first time neing the only white chick in a sea of dark faces. Jim, formerly played proball with the broncos, normally self assured, peered into restaurants to see if any blacks were in there before we went in. One of his buddies had been shot in the back in a dark movie theatre for being there with a white girl.
At one neighborhood party, I stepped out into the humid dark, I think for some fresh air and an ironic cigarrette, and was pulled back in by concerned new freinds, worried that I might get shot for being white on the wrong block.
We had goat that was buried and cooked, barbecued all day in the ground. We had turtle soup. We had something called SAUCE that had chewy pigfeet in it. All of that was fine, bit I couldnt abide by the horrible taste of Folgers Instant coffee.  I should have known there would be trouble.
That was Jims sentimental journey home. hIs dad was ill, thin and dry as a paper bag, but always delightfully chatty. I will always cherish the peculiar image of the open bedroom door, mama, shaped like a loaf of pumpernickle bread, laying on her back, Jims dad sound asleep on top of her like a thin piece of crispy bacon, both fully clothed and serene.
My journey with Big Jim was not going to last like that.
Broken trust was the abrupt and final end of it, but like the song, coffee remained a remedy, an elixir and a passion for me.
Years later, with high school aged boys, living in cohousing, I was so delighted by my Ethiopian neighbors coffee ceremony that I eventually took to making my own.
Mulu roasted beans in the common house and the pungent smoke twined with the burning sweetgrass offerings up into the rafters. A most unforgettable pairing.”A man is born to love a woman,” the song says, “a woman’s born to weep and fret, to stay at home and tend her oven, and drown her past regrets
in coffee and cigarettes.”
I got over him, eventually, new loves, you know.

My only concern with the man I married ten years ago, was that he didnt drink coffee! And a shiftworking firefighter too! What would my family think! We had a very strong coffee ethic, no pun intended. We were weaned on chocolate covered coffee beans, and in adulthood, anyone out of coffee was quickly resupplied with the magic beans, no questions asked, no money exchanged. It was nothing short of a medical emergency.
Well, I really knew my new man loved me when he took me to meet his buddy who roasted coffee. He then let me roast my own beans in a popcornpopper, in the basement. Billowing smoke, the pyroclastic crackling indicating the change from a dull brown continental coat to an oily dark shiney espresso bean.

I am left, as usual, with as many questions as forgotten lyrics to a favorite tune.

How can that searing burning earthy smoke have anything to do with such an addictive, euphoric, synapse stimulating beverage? Just think of it! The poor bean is broken, crushed, pressed down and bloody boiled!

How can singing the blues lift up the despondant heart?

And finally, how is it that every journys end, once you’ve put on your tattered traveling hat, simply become the beginning of your next new grand adventure?